Can you fine-tune anonymity to specifically foster out-of-the-box thinking, critical thinking or controversial opinions? We think you can!

A feedback from a customer - Jonathan Friesen (@jonny_freeze), Director of People & Operations at Jane, has led us to a solution.

Let's start with a refresher.

Earlier this year we launched the Flag as Inappropriate and Anonymous Karma features to hedge against the downsides of anonymity by allowing teams to self-regulate anonymous posts, replies and polls.

Flag as Inappropriate requires a number (3 by default) of flag reports to permanently remove anonymous content. 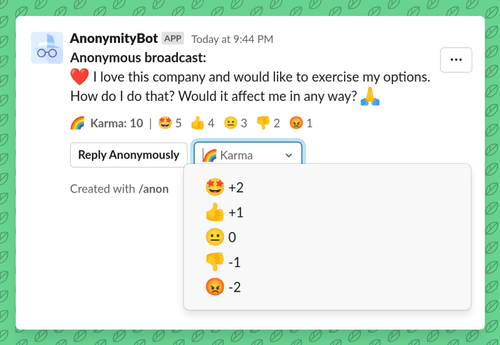 Content with a score below a threshold (0 by default) is hidden, but can still be viewable.

Allowing unpopular opinions may be achieved by adjusting the Karma threshold at app.opensay.co. For instance, a Karma threshold of -2 would require at least 2 different people to set negative Karma, effectively allowing more opinions to be heard by prolonging the settlement time of upvotes and downvotes.

Contrarian thoughts may be downvoted without a thoughtful reply

We got an insightful feedback from a customer that raised a great point.

"We're finding that the Karma feature is causing some consternation on our team--it's effectively encouraging people to rate someone's opinion without taking the time to thoughtfully reply even when they disagree. Is there a way for us to disable just the Karma feature? I like the flag feature though, since that can highlight potentially toxic material."

"Actually, just to add to my previous comments--I realize that the part that's generating grief is the down votes. I can see how on platforms like Reddit, it's helpful to hide content from certain opinions, but right now, I want our company to be a place where we're ok with hearing people's voices, even if we don't totally agree with them. If they're toxic, I want to flag those ones, but for just unpopular ones, I don't feel like down voting them will help our culture."

Even with an adjusted Karma threshold, people may still be encouraged to only rate someone's opinion without taking the time to articulate a thoughtful reply.

Can we solve this?

Allowing only non-negative Karma (e.g. 🤩 +2, 👍 +1, and 😐 0) can help bold organizations foster contrarian thoughts and capture the upside of critical thinking.

It encourages people who disagree to reply (they can't dismiss with a downvote) and allows others who share the opinion to support them by rating with positive Karma.

How to allow non-negative Karma?

Slack admins can disable negative Karma by signing in to opensay.co: 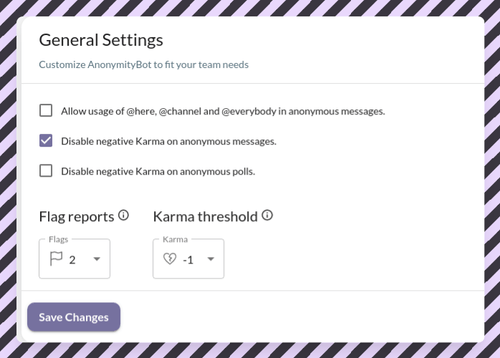 We're constantly striving to improve OpenSay and would very much appreciate your feedback. What could be better? Which feature is missing?

We welcome comments and thoughts on the tweet below, and kindly ask for a like, retweet or a follow to help us spread the word. Thank you!

Thanks @Jonny_freeze of @JaneRunsClinics for your insights that led to the creation of this feature.https://t.co/7xRbCAMdaM #HR #leadership #slack